Imagine for a second you’re in a total SHTF situation.

Access to places you’d go in your day-to-day life like the grocery store or the pharmacy has been completely eliminated.

Outside things are going crazy, so you’re doing your best to stay safe at home. Amid all the hullabaloo you’ve gotten injured. You know you can’t go to the doctor or the pharmacy to get a prescription, and unfortunately you only have a small bottle of pain medication to help out with your present situation.

What you just read is a very likely outcome of what might happen during a disaster.

While sensible preppers will do what they can to stock up in pain meds before a crisis; there are a few limitations as well as a few dangers associated with this practice.

For instance, getting a doctor to write you a prescription for some stronger medications that’ll help you in a crisis is impossible. No doctor will risk his license to write you a script so you have a year’s supply of prescription pain meds on hand.

Let’s say you decide to buy bottles and bottles of Tylenol or Ibuprofen. While not a bad idea from a bartering perspective, forcing your body on these drugs day in and day out can have serious health consequences.

Taking just a few mg more than the recommended dose of Tyleonol can make you quite sick.

While doing some research about Tylenol overdoses PBS wrote:

“Taken over several days, as little as 25 percent above the maximum daily dose – or just two additional extra strength pills a day – has been reported to cause liver damage, according to the [Food and Drug Administration]. Taken all at once, a little less than four times the maximum daily dose can cause death…

There are similar risks from Ibuprofen, which when taken for extended period of time can cause damage to the lining of the stomach and also increase your risk of stroke and heart attack. So, not nearly as safe as you might think.

Because of the dangers associated with pain relievers and because of the strong likelihood of their scarcity it’s a great idea to know what natural alternatives would be.

The following natural alternatives for pain relief don’t just happen to be easy to grow ,many of them are actually quite potent and will quickly neutralize pain. Some are so effective (while still being quite safe) pharmaceutical companies are resorting to unethical trickery to get them banned.

Take a look at these plant based pain relievers below.

You might have heard about Kratom before, it’s a plant based therapy sold here in the U.S. Native to South East Asia, kratom is a tree similar to coffee in classification and thrives in warmer climates.

And just like coffee it can alter mood when taken. This has caused some concern among medical professionals and pharmaceutical companies who don’t like psychoactives, but the biggest risk associated with kratom use is dependency (similar to a strong reliance on coffee). The potential of kratom to harm the body from intermittent use is non-existent.

The main reason people have used kratom (it’s enjoyed centuries of use in Asian cultures) is because of it’s ability to help treat pain.  “Dutch botanist Pieter Willem Korthals [said], kratom is used as a traditional medicine to reduce pain, as an anti-diarrheal, and as way of reducing opiate dependence. In the latter case, kratom leaves are chewed or consumed to decrease symptoms of opiate withdrawal.”

The truth is it’s so effective as a pain reducer there have been numerous attempts by the FDA and pharmaceutical companies to stifle its production and distribution. Most notable was a raid of a distribution facility in California back in 2014.

Kratom can be purchased legally here in the US, most often in a powdered form, and can be safely stored for a long time. It’s relatively inexpensive and remains one of the most effective and potent natural pain reliever around

I wrote a blog post on the properties of  white willow bark a few months ago but figured it’d be a good idea to loop back around and touch on it again.

One of the reasons to know about willow bark’s medicinal properties is because it’s far more common than kratom (and other plants on this list).

Those of you living on the east coast should have no issue finding the white willow tree, and when you do you can quickly strip the bark to help access the medicinal portion of the tree.

White willow bark contains a compound called Salicin. Chemically salicin is similar to Aspirin in how it affects the body. It’s a strong anti-inflammatory and can effectively reduce pain and swelling in a matter of hours.

For centuries people have used it in teas, or compounds and if you’d like to see its production demonstrated take a look at this video.

Well the name all but gives away what this plant be able to do.

Unlike the poppy plant which produces strong opiates in its sap (and is illegal here in the US), Wild Opium Lettuce plant is perfectly legal to grow in the U.S as its considered to be a weed.

Just like the poppy, the sap of this plant is the carrier of its medicinal properties.

Usually the O-lettuce sap is scored/scraped/squeezed from the leaves and stalks and ingested orally or mixed with juice, or made into a tea. Or even smoked for maximum fast effectiveness. The effect is a whole body numbing that relieves muscle and joint and inflammation aches and pains. O-Lettuce also works for bad coughing and helps to induce sleep. It is known as a safe, effective pain reliever without side effects or addictive properties.

If you’re interested in growing this plant I’d suggest doing some further research on it in botanical books or blogs.

Kava Kava, or kava for short, is very similar to kratom in that it’s a very effective and potent pain reliever that has been targeted by the pharmaceutical industry.

Kava comes from the root of the kava plant and has mild sedative properties and mild pain relieving properties. Native to Polynesian islands as well as Hawaii it has been used medicinally there for centuries. Those cultures have used kava quite effectively to treat headaches, body aches, muscle tension, Fibromyalgia and more.

The reason it’s so effective is because it contains special compounds which are known to relieve spasms. One of the strongest is Nuciferine which is a known anti-spasmaodic.

Sage has one of the longest recorded uses for pain relief in history. The ancient Greek’s used it for a number of medical conditions and it’s even found to be used in traditional medical practices all across the world.

The plant which is found in abundance in the American West has quite a few distinct medical properties. It has anti-bacterial, anti-fungal anti-inflammatory, anti-microbial, anti-septic, anti-spasmodic, and anti-viral which endears its use in a number of circumstances.

In terms of pain relief sage is great at helping to reduce effects which helps to reduce muscle tension and can help to relieve pain as well as helping out with a wide variety of other health conditions.

Research on sage has shown its been quite effective at helping out with a number of conditions associated with chronic and temporary pain including gastrointestinal upset, tension headache, muscle tension and more.

Truthfully sage has some of the most well documented uses out of any plant on the planet.

It’s been shown to help with the following conditions:

A Final Word On These Natural Remedies

I think you probably know this already but it’s worth repeating.

While many of these alternatives to popular pain relief drugs are much safer and much less addictive then pharmaceuticals there always exists the chance they can be be abused.

Understand these remedies are only ever meant for temporary pain relief, not for daily use.

Again, these alternatives are for those of you who want to avoid the pitfalls associated with running out of normal pain relief supplies.

In the event you’re injured to the point of requiring any of these treatments you’ll likely need to be treated with medical supplies found in emergency first aid kits.

I suggest highly you keep a first aid kit on hand.

Perhaps one of the best ones to own is our affordable and comprehensive 409 piece kit.

Click here or on the image below to learn more about this life-saving emergency first aid kit. 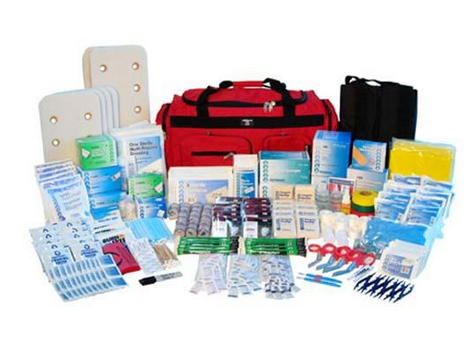