Picking the right knife for a survival situation isn’t as simple as going down to the nearest hunting shop and asking the guy behind the counter what he’d recommend. If only it were.

There’s a lot more to it than that which is why I wrote on how to choose a survival knife.

First things first, it’s not really complicated to find a survival knife. However, there are certain things you’ll want to keep in mind when you’re spending your hard earned money on a blade. Things that some people don’t think about and end up regretting not paying attention to.

Remember, your knife isn’t just a whiz-bang gizmo that you’ll pull out at opportune times to impress people…your very life could depend on this piece of metal. Meaning you want to perform your due diligence and select a knife that meets the important criteria a survival knife should meet.

And at the end of the day a knife is arguably one of the most important tools you can own for SHTF scenarios. With it you can defend yourself, create a shelter, kill an animal for food, fix broken appliances, help someone escape in an emergency.

And while I understand there are different uses for different kind of blades, this article will focus on using a knife for the most demanding survival situations.

How To Choose a Survival Knife in 6 Steps

Look, if you’re buying a knife for EDC (every day carry) then it makes sense to go with a knife that’s a little more compact, a little bit lighter.

When you’re selecting a survival knife a bigger knife is going to be more advantageous to you.

That’s because a bigger knife is going to be more durable, provide a stronger edge, and will also carry more weight which allows you to use it for certain survival purposes smaller knives won’t be able to stand up to.

Ideally a survival knife should be 9-12 inches in length. If you’re getting a knife that’s longer than 12 inches you’re actually moving into mini-sword/machete material. These are useful blades too, but in terms of easy carry and effectiveness a blade that’s 9-12 inches will deliver top-notch durability and the flexibility you need from your blade.

Some people might argue with me on this but I’ve determined a fixed blade knife is superior to a folder because it’s going to offer more durability and is safer for extreme use than a folding blade.

In case you’re curious what the difference between the two is let me explain. A fixed blade is a knife that doesn’t close on itself. Your chef’s knife in the kitchen is a fixed blade. A folder is a knife that bend in the middle to conceal the blade inside its handle, think Swiss Army Knife.

Folding blades are great for EDC, but fixed blades are better for survival use. With a fixed blade you can place an incredible amount of force on the blade without worrying about a locking mechanism failure causing the blade to fold and harm you, the user.

Fixed blades let you use the knife for chopping, stabbing, pounding, thrusting, prying and hard cutting and folders simply won’t be able to safely stand up to that kind of use.

You probably have no idea what a rat tail is. That’s OK.

When I refer to tang I’m making reference to the piece of metal extending from the blade into the handle.

A rat tail is a long, skinny piece of metal (resembling a rat tail) stretching into the handle. The reason you want to avoid a rat tail, or any other blade tang that isn‘t full tang, is because it compromises the durability of your knife.

Take a look at this image below to get an idea of what different tang configurations look like: 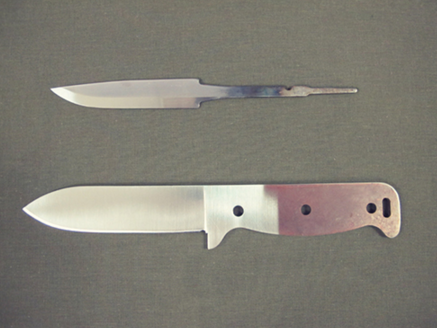 As you can see the blade on the bottom has a fat metal handle that extend from the handle’s sides and all the way to the bottom.

The other has just that sliver of metal.

Full tang knives allow you to really use the knife in the ways intended. You can safely chop, stab, cut, pound, pry and more with this blade arrangement.

On the other hand a rat tail or other kind of knife could snap off and break in use…pretty much the last thing you want to happen to your survival knife. Not only is it dangerous, it would also leave you without a knife which you obviously need.

There is absolutely no advantage to a partial tang knife. But a full tang knife provides you with numerous advantages. Some of the full tang knives even allow you to remove the handle parts revealing just the metal so you can affix it to a study stick and make a spear out of it.

If you want to see if your knife is full tang or not all you have to do is see if the tang is exposed between the sides of the handle. It should look like a sandwich with the metal of the knife exposed as the meat. If you don’t see that then it’s safe to say your knife has a partial tang set up.

Obviously if worst comes to worst partial tang will definitely suffice in an emergency situation. It’s just that if you’re going to spend money on a quality knife you want to ensure it’s going to last.

There’s a large number of knives out there that are considered  survival knives that are anything but.

Some of these are called “emergency knives” and they have a blunt, almost round tip.

Avoid these at all costs. They’re great for search and rescue parties but they’re not good for survival situations.

Instead you want a knife with a sharp, pointy tip.

But not just any tip mind you. It’s got to be sharp but strong. If your knife has a needle nosed dagger point it’s liable to break when exposed to the rigors of survival situations.

A spear point is one of the best knife tips around. It can be used to harm an enemy in self-defense, can work suitable for prying, and can even be used to help hunt animals. Plus a spear point can help with “Cleaning/dressing small game such as fish. Drilling/Notching Clothing/Gear Repairs Splinters! Processing some wild edibles such as pine nuts, acorns, walnuts, and hickory nuts. Accessing live bait in hard to get areas.”

5 – Make sure the blade is a single blade only:

There are some knives that have a blade on each side.

Think about the typical dagger where each side of the knife is the same and both are equally sharp.

Avoid this style of blade because it’s not going to be suitable in a survival situation.

The reason you want a single blade is because you’ll want to be able to apply pressure to the unsharpened side when performing tasks like chopping, batoning (where you use a heavy object to strike the back of the blade for added cutting power) and even for fire starting.

A double-edged blade would be of no use in this instance. When selecting a single edged blade it’s best to find one whose back is completely flat. This gives you the ability to use it as a fire starter (as long as you have a ferro-rod) and also helps you with the aforementioned techniques.

Now when I say butt of the knife I’m referring to the bottom or what’s also known as the pommel.

You’ll want a firm butt, or a durable pommel, because you’ll be able to use that as a hammering or pounding tool. The same can also be said that if you have a solid pommel you’ll be able to hit it with another heavy object to drive the knife farther into a dense object.

The butt of the knife is often overlooked and really shouldn’t be.

Is That It On How to Choose a Survival Knife?

You can definitely get into quite a few more intricate details of choosing a knife.

When it comes down to it though these 6 features are what you’ll ultimately want to have in mind when selecting a knife. That means if a top-rated knife company can’t give you a knife with these features then that knife company might not be who to rely on.

The other consideration is to make sure you have an accompanying survival kit for it to go along with.

Go here or click on all of the pictures below to check out all of our survival kits.