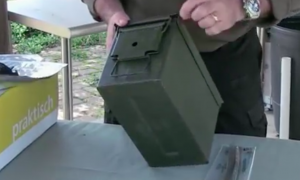 One of the biggest threats everyone on the planet faces is an EMP event, which is why people using a faraday cage to protect electronics.

A lot of the time when we hear about EMPs we think of a nuclear bomb going off and knocking out the grid. That’s certainly a possibility.

There’s also the chance the sun could have a huge plasma burst which travels through space and knocks out the world’s electronics.

That’s why you’ve got to prepare for the eventual reality of an EMP.

I had a good friend of mine in the survival world do a guest post for me on this subject.

Will Faraday Cages Work in Case of an EMP?

You can’t immerse yourself in the world of prepping without hearing about the controversial necessity of Faraday cages to protect your electronic circuits from the results of an EMP.

Most people visualize an EMP as an intense explosion of energy, or an overload, or short that essentially damages electrical circuits, especially those used in cars, planes, and home electronics and systems. It’s a little more complicated than that. An EMP can consist of different combinations of electrical and magnetic energy or interference.

Many preppers believe that items stored within a faraday cage before an EMP will remain operational or can at least be used to repair electrical systems after an EMP event. But, is the threat of an EMP even realistic? Is it possible for the average person to build their own faraday cage? And will Faraday cages work in case of an EMP?

It may surprise you to know that our planet and its citizens have already experienced natural and man-made EMPs caused by all of the following phenomena:

If you more thoroughly research EMPs, and their causes, it becomes clear that debating whether an EMP event CAN HAPPEN is pointless becauseo they have and do happen often. So, once we know that EMP events are indeed a real threat, we can focus simply on protecting and shielding our electronically sensitive devices from its effects.

Building on the research and experimentation of Benjamin Franklin, Michael Faraday, and others, several types of Faraday shielding is already in use for things you’ve never thought of such as:

This means that the answer to the question of whether a Faraday cage will work in the case of an EMP is that it depends on the sensitivity of the electronic devices inside to EMI, the type and strength of the electromagnetic wave event, and the distance involved.

For example, a lightning strike nearby is measured in tens of volts per meter whereas a huge nuclear blast can result in millions of volts per meter. A simple copper screen cage will reduce the electric field but won’t do much to protect against the magnetic field.

For the best protection against EMP, you would need a Faraday cage made from mu-metal. MU-metal is a nickel-iron soft magnetic alloy with high permeability and is used to shield sensitive electrical devices and circuitry from static or low-frequency magnetic fields.

But other materials, even heavy duty aluminum foil, can provide sufficient shielding. The ideal room construction for a Faraday cage is made up of three parts:

Doors must be sealed with continuous metallic pneumatic tube, electrical contact strips or conductive tape so as not to allow leakage. Many kinds of electronic devices are already resistant to EMP. Anything small or anything in a metal case probably already has some protection.

In the real world, especially one that is so completely dependent on electricity for survival, the thought of all power being shut down temporarily or indefinitely by an EMP is more than a little scary. But rest assured, with the proper knowledge and materials, you can build a Faraday cage that will effectively protect your vital electronics from the impact of an EMP.