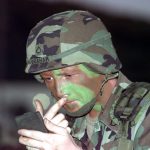 Do you own any camouflage gear?

I do. Camouflage patterns are found on so many different products that it’s easy to forget the fact that camo serves a specific purpose.

Heck – I’ve seen camo bath towels, camo swimsuits, and even camo skivvies. And I’m pretty sure anybody running around in their underwear isn’t really trying to blend in.

In recent years, many people have begun to argue over how useful camouflage actually is for hunters and the prepping community. Keep reading for my view on the issue.

Why Preppers Shouldn’t Rely On Camouflage

When I was younger, I always assumed that the “point” of camouflage was to make the wearer invisible.

You’ve probably seen a few photos that play into this idea as well. 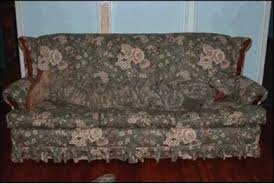 Did you spot him?

In reality, camouflage material is meant to be visually disruptive and break up the shape of the human body to trick the eye.

Basically, the human brain is really good at identifying patterns, and the goal of camouflage is to trick the brain into interpreting someone wearing camo as just another part of the environment.

The Problem with Camouflage 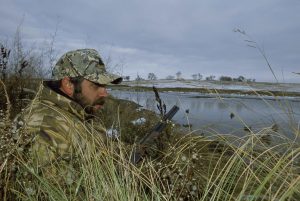 In my research, I’ve found that most people agree that using camo (for hunting and warfare) is a good idea.

Okay then… what’s the problem?

The problem is that too many users think that camo is a magical cure for being a bad hunter and/or not thinking strategically out in the field.

Yes, camo in and of itself probably won’t hurt your chances of landing a buck, but did you know that it’s been scientifically proven that most animals rely more on scent to avoid predators than sight?

So, go ahead and cover yourself head-to-toe in all the camo patterns you’d like, that won’t help you much if you stand upwind of your quarry.

To be sure, camo gives you an edge, but you need to make sure you aren’t relying on camo alone to do all the work for you.

Personally, I’m not going to stop buying camouflage gear, but I’m also going to keep working on other survival and bushcraft skills like improving my aim.

Like many things in life, the best camo pattern is the one that works for the environment you’re in.

Different patterns work better in different areas, so plan ahead and consider where you plan to use your camo.

If you need any proof of this concept, just look at the story of the U.S. Army’s Universal Camouflage Pattern (UCP). This was a single pattern that was meant to work across all environments.

To borrow a phrase, UPC was a jack of all trades, but a master of none. And the project was considered a total failure.

In addition to geographic considerations, the context of how you’ll be using the camo is important too.

Most camouflage patterns don’t work well in close quarters, and ones that work at close to medium distances won’t work for long-range.

You also have the option to make your own camouflage like in the video below.

Are you a veteran with experience wearing camo? We’d love to have you share your thoughts in the comment section below.

And if you liked this blog, be sure to check out these recommended links:

Things That Will Instantly Give Your Location Away When SHTF

Discover the Latest and Greatest Survival Gear Available to the Public

The Best & Worst Bug Out States