You Need to Be Able to Navigate Without GPS

Have you ever thought about what it’d be like to travel the country without GPS?

It seems like in the past few years I, and everyone I know, are completely dependent on GPS to get anywhere. I’m going to be the first to admit the advances we’ve seen in technology in the past 20-30 years are astounding.

It’s incredible a little device no bigger than my hand can help me navigate just about anywhere on the globe.

But here’s the thing about GPS.

It relies on electricity and satellites, two things which you’re going to be hard-pressed to have ready access to in a survival situation.

That’s why if you’re ever without GPS it’s going to be essential you can still navigate so you can get yourself to safety.

But how do you do that?

There are a few rules you can follow that’ll make it easy to get un-lost…even if you don’t have a map or a compass.

Check them out below.

4 Ways To Navigate Without GPS (Or a Map Or Compass)

The next few tips i’m going to offer are assuming somehow you’re out in the wilderness and don’t have access to a map, a compass, or a GPS.

While it’s highly unlikely this will ever happen these concepts are valuable beyond belief.

1 – Use plants to determine direction:

Plants are going to be some of your best friends if you’re ever lost.

By observing how and where plants grow you can quickly determine which direction you’re headed.

One of the most common words of wisdom is to look for moss growth on trees and rocks. Because moss thrives in cool, damp environments it doesn’t grow in direct sunlight.

This doesn’t mean the old saying about moss on the north side of trees etc. is accurate. It’s actually not.

“Actually, growth is more lush on the side of the tree facing the south in the Northern Hemisphere and vice versa in the Southern Hemisphere. If there are several felled trees around for comparison, look at the stumps. Growth is more vigorous on the side toward the equator and the tree growth rings will be more widely spaced. On the other hand, the tree growth rings will be closer together on the side toward the poles.”

You can also look to see where flowering plants are growing in great amounts.

Plants like this are going to seek out the sun’s powerful rays and will be in abundance in areas exposed to the sun’s light. That means if you can see significant collections of flowering plants (and even see which way they’re stretching) you now have a sense of direction.

In all reality a river is going to be one of your best friends when it comes to safely exiting a dangerous situation.

That’s because they are a source of water, potential food, and many of them flow back to civilization.

Despite what you might have heard about the direction rivers flow there really isn’t a uniform statement we can make about all rivers and their movement.

Some will flow north, then south, then east and west. You really can’t confidently say the river or stream “always” moves in one way.

Again the reason you’ll want to follow it is because your chances of being led to civilization while traveling alongside it are high.

The weather can tell you a lot about where you are.

In particular moisture patterns can help you determine northern and southern facing slopes, which could be crucial for escaping a crisis.

If you’re in the northern hemisphere the north-face of a slope is going to be exposed to less sunlight and are therefore cooler and damper than the opposite side.

If you’re in high elevation this means the northern side of a slope could still have snow deposits.

Likewise in the winter the snow is going to be deeper and stick around longer on vegetation than on the south side.

4 – Using the sun and shadows:

This is an ancient way for determining direction every single person should know.

As you know the sun follows a routine of rising in the east and setting in the west.

Though it’s not a true east and west, the thing we can count on is the sun’s movement no matter the time of the year is always going to be consistent.

The way you can use the sun to give you a precise sense of direction in the northern hemisphere is by understanding the sun’s always going to move in a way where shadows move clockwise. The opposite will be true in the southern hemisphere.

And with a stick and clear sky you can use the movement of those shadows to establish a precise sense of direction:

In the first shadow-tip method, find a straight stick 1 meter long, and a level spot free of brush on which the stick will cast a definite shadow. This method is simple and accurate and consists of four steps:

An alternate method is more accurate but requires more time. Set up your shadow stick and mark the first shadow in the morning. Use a piece of string to draw a clean arc through this mark and around the stick. At midday, the shadow will shrink and disappear. In the afternoon, it will lengthen again and at the point where it touches the arc, make a second mark. Draw a line through the two marks to get an accurate east-west line (see Figure 18-1).

A few notes about what you learned.

I strongly suggest before you ever venture out into the wilderness you study the area you’re going to before you set out on your adventure.

Pay attention to landmarks beforehand so you can use them later if you ever get lost.

As the guys at Backcountry hunters say:

“The cardinal rule of wilderness travel is to always know where you are and where you’re going. When you plan your travel routes, scan your map and identify easily recognized waypoints. When you travel, watch for these and check off each one as you pass it. That way, you’ll always know your position, and this knowledge will give you the confidence you need to strike out cross-country.”

3 Methods For Emergency Navigation Without GPS In The City

Now this might not seem like a necessary thing to focus on, but let me remind you of something.

If an EMP were to strike, or another significant disaster were to hit the odds you’re GPS will work are slim.

That means if you want to make a quick exit from a city you’ll want to know how exactly that can be done.

Could you imagine what would happen if you were in a city you’re unfamiliar with when an emergency situation crops up? As hundreds of thousands of people spill out into the streets would you know the easiest ways to get your bearings so you can flee?

1 – Pay attention to churches and other religious buildings:

Our nation was founded by people who took their devotion to God seriously.

And a lot of that devotion is borne out in the buildings they built for worship.

In many of the larger and older cities here in the U.S. churches have actually been designed so they face east.  Thats because they wanted the facade of the building as well as the main altar to be pointed towards the rising sun.

Same thing’s true of Christian graveyards. Many of the gravestones have been laid so they have an east to west orientation as well.

It’s not just Christian churches that do this.

Mosques are also built with direction in mind as adherents to Islam have to pray towards Mecca which is east of America.

To use a mosque to find direction you’ll want to go inside and then find one of the prayer niches. Depending on where you are in the world the way the niche points tells you direction.

You see them all the time, mounted on the roofs of houses and apartments.

Turns out satellite dishes are actually a great tool to use for instant direction finding.

This is because the satellites are oriented in a south-eastern direction so they’re able to receive the signal from the satellite high above the Earth’s surface.

That means as you travel through an area in a densely populated area you can survey the direction multiple satellite dishes and determine the way you need to go.

3 – Notice the weathering on buildings:

This tip is one many people don’t think about.

Here’s why it’s such a good idea to pay attention to buildings and their wear patterns.

The prevailing winds carry rain and pollutants. These two substances then hit the building leaving patterns of discolorations on the buildings. If the wind comes from one direction more than the others, say the southwest, this leaves asymmetrical weathering patterns on buildings similar to the erosion observed in nature.

Look up at the higher floors to see the natural stone or the weathered bricks. Notice how the building corners all show different weathering patterns. The contrast between the southwest and the northeast corners would be the greatest. With a little practice the shifts in colors where the rain and pollutants have left their mark can be read on all sides of the buildings.

At the end of the day knowing these tips and techniques serve as a great fallback if GPS services are ever unreachable.

In all honesty I highly suggest a compass and a map as tools to have in your bug out bag.

One of my favorite compasses is contained in this unique 5-in-1 tool.

It’s incredibly affordable and could easily help you out of a jam.

Click here or on the image below to see everything it does. 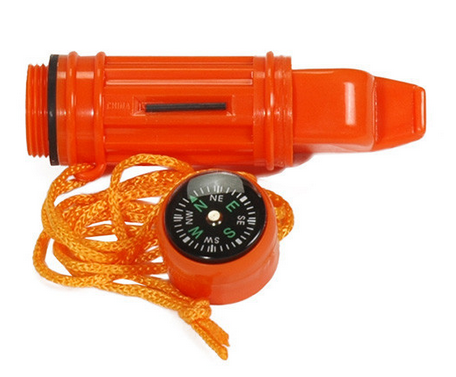 use this if you’re ever without GPS