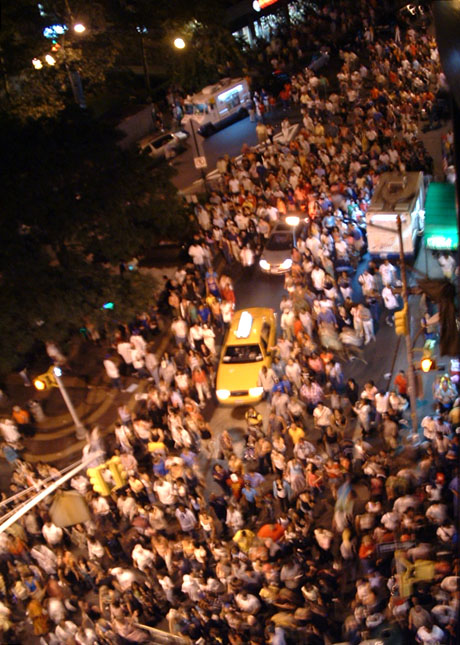 If the last few years’ riots and protests have taught us anything, it’s that we MUST know how to survive civil unrest, looters, and riots once SHTF.

You think the recent political protests and Ferguson riots were bad?

Once a major nationwide (or worldwide) crisis occurs, these events are going to seem like a walk in the park.

After all, once the grocery store shelves have emptied and the water supply had dried up, everyone is going to have to protect themselves and their resources from those looking to take it for themselves.

However, the skills you’re about to read aren’t what you think; in fact, I believe violence rarely helps a tense situation, and should only be used if your life depends on it.

You’re about to learn how you can prepare now in order to outsmart, outrun or outright avoid these looters, protesters and rioters, and to help keep yourself and your family safe from harm.

How To Survive Civil Unrest, Looters & Riots When SHTF

I understand that you have beliefs and morals and probably won’t be happy about the civil unrest you’ll be facing once SHTF. Believe me, I get that.

But in order to protect yourself and  the ones you love most, you’re absolutely going to have to blend in with the protesters and rioters around you.

I’m not asking you to believe in what you’re saying/doing, but I am asking you to go undercover and blend in with those around you so that you can escape as soon as possible.

Because believe me, the last thing you want/need is hundreds of protesters coming after you for trying to give them a lesson on morals.

Which leads me to my next point…

If everyone is headed in the same direction, it’s best to follow the crowd as long as you have to until you can escape.

Now, in theory, a crowd like this might seem easy to get away from…but I fervently disagree.

In a riot there is pushing, shoving, and absolute civil unrest. People also tend to go a bit crazy, lighting torches and setting things on fire, and tipping over cars.

Angry protests and riots are not typically something you can just walk away from whenever you feel like it.

However, by following the current, you’ll avoid drawing attention to yourself, and you’ll also be a lot less likely to become crushed by hundreds of people.

Try to move toward the edge of the mass of people and escape down an alley or side-street as quickly as possible.

However, there may be times when you’re not on foot; sometimes, you might be in a vehicle trying to navigate your way through the chaos.

These are special circumstances for which you need to prepare. That’s why I’ve included the following video to give you tips on how to survive these angry crowds while driving. Take a look:

Despite what you’re feeling in the moment, it is absolutely imperative that you keep your cool and don’t lose your head in the middle of a mob. This is also true if you witness looting happen on your own street or in your own neighborhood.

Now this may feel against your morals and belief system, but I assure you that if you see looters carrying television sets out of the local Target, and you stop to give them a lecture on theft, you’re sure to get attacked and will most likely get a bullet in your brain.

In order to survive in these situations, it’s often best to take a deep breath, look away, and focus on getting to safety.

You know that saying, “Nothing good ever happens after midnight?” Well, it’ll never been more true than once looters, rioters and protesters are flooding through the streets and marching outside your front door.

Not only do people go crazy during these situations, but they also tend to think that they can get away with a lot more wrongdoings once the sun goes down.

And with the combination of law enforcement and angry crowds, you’ll find that outside is the last place you want to be if you want to survive and keep out of trouble.

Lock your doors, keep firearms and other weapons within reach, and wait it out.

When it comes to small gangs, large mobs, or anything in between, one fact generally stays the same: there is a leader – or leaders – influencing the rest.

Whether you’re dealing with a small group of looters or a mob of hundreds of angry protesters, the rule of survival is the same: avoid their leader(s).

Not only will avoiding the leader help you keep a low profile and stay out of trouble, but it’s also likely that, if you do get into trouble with one of the group, your fate will not be nearly as bad as it may have been with the head of the pack.

After all, it’s easier to take on one or two individuals than it will be to take on an entire group, especially when they’re acting upon the orders of their leader.

Securing your home is a crucial step in protecting it from looters, rioters, and civil unrest. Thankfully there’s a number of ways to do this without raising too much suspicion. And, with enough of these precautions, it’s likely looters will deem your house too difficult to break into, and will move onto another home.

The first step is to reinforce your front door; after all, the front door is where 80% of burglars enter from.

Now most people think burglaries happen because the front door breaks and splinters when force is applied; however, this is not the case.

Burglars are able to get in because of the damage done to the door jamb (the vertical portion of the door frame that the deadbolt fits into). By damaging the door jamb, the door can no longer deadbolt into place, and it leaves the front door standing wide open (literally).

One of the best solutions to this is to purchase a door club. The base of this handy device screws into the floor directly in front of the inside of your door. When you want to prevent intruders from breaking in, set the head of the door club (which looks like a long, horizontal metal oval) into the base in the floor.

This way, when the door is opened, it will immediately hit the door club, and will heavily reinforce your door from being kicked in or otherwise broken into.

Another way to secure your door is to check the screws in the door hinges. Sometimes, sellers that don’t want to spend the money on repairs will place small screws into the door hinges, leaving your door vulnerable to anyone kicking it in. Make sure you have at least 3″ hardened steel screws in your hinges to keep that door in its place.

Third, you can get small alarm systems that stick to the inside of your doors and windows. Turn it on, and as soon as your door/window opens, a loud buzzer will go off, alerting you and the intruder that the entire neighborhood knows they’re breaking in. This will help prevent them from pursuing the robbery.

Another great tactic to deterring looters is to plant rose bushes underneath each window. Rose bushes look beautiful on the outside, and yet have prickly thorns that will puncture through the skin of anyone that tries to get too close. And, when SHTF and panic sets in, looters will be looking for homes they can break into FAST – not ones that look like they’ll be a hassle to get into.

Now obviously there are MANY more ways you can deter looters from entering your home – and it’s my job to help you prepare as much as possible for a break-in.

First, I highly recommend on reading two of our blogs regarding home security hacks for keeping your home safe from burglars. The links for these can be found here and here.

We’ve also got a blog on 10 DIY Booby Traps For The Home, which can be found here. Keep in mind a lot of these are currently illegal; however, in an SHTF situation when everyone is fending for themselves, these could really come in handy.

Most importantly, when protecting your home it’s important to think like a looter. By getting yourself in this mindset, you’ll be able to do substantially more to protect your home, since you’ll be the one coming up with ways of how someone might break in.

To help get you in the right mindset, I’ve included a video below, which contains footage from an actual, convicted burglar, and his confessions on how he got in. By listening to his stories, you’ll be able to take the precautions necessary prevent this from happening to you. Take a look:

7 – Be Prepared To Defend Yourself

You know how I said that violence shouldn’t be used unless you absolutely have to? As true as that is, violence is always something you need to prepare for in case you get in a situation where you have to defend yourself.

When you’re in a life or death situation, it is absolutely imperative you have a variety of self-defense weapons on you that you can use on the enemy in order to stay alive and ultimately escape.

One excellent way of defending yourself is to carry a gun and/or survival knife. These weapons can often be easily concealed, and can truly be the difference between life and death. Don’t know which survival knife to bring to the party? I’ve got some tips for you here.

Another excellent way to be ready to defend yourself at all times is to have compact survival tools on your person (either in your pocket or in your bug out bag) that you can use in a moment’s notice.

These survival tools are especially effective because they’re more unexpected than knives and guns (thereby taking your attacker by surprise), and are often even easier to conceal.

We’ve got a few pieces of such tactical gear that could be highly effective in an SHTF situation like this.

Not only are these tools compact and easy to use, but they could easily disorientate an attacker, as well as do some significant damage with the right amount of force.

The best thing about these survival tools, though, is they each have a multitude of uses. That way you can use them for self-defense, as well as a variety of other uses when you’re not in crisis mode.

When it comes to rioters, looters and protests, you truly have to take your life in your own hands if you expect to survive – and that means preparing for disaster NOW so you’re ready when disaster strikes.

Prepare for the worst by supplying yourself with the best. Click on the images below to get these defensive survival tools for yourself today.

How To Survive Civil Unrest, Looters & Riots When SHTF