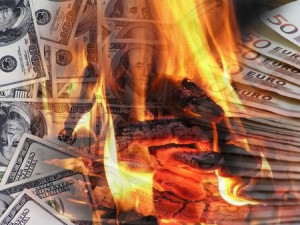 One of the hardest things for us preppers to do is to warn our unbelieving friends and family of the signs an economic collapse is close.

It has become abundantly clear that this is merely a foregone conclusion at this point – the dollar has been steadily losing value, more and more jobs are being outsourced to foreigners rather than working Americans, national debt is through the roof, and energy, food and housing costs continue to rise at alarming rates.

The harsh reality is that we see the economic collapse coming (and coming fast), but many of our friends and family don’t…and that is the truly scary thing. We will be the ones having to watch them suffer for their indifference and falsely placed optimism.

However, there’s still hope. We can still prepare them (and you) with these:

3 Signs An Economic Collapse Is Close:

1 – We’re Overdue For An Economic Crash

About every seven (or so) years, this once-great nation has seen a significant stock market crash. These crises have been consistent and life-altering – from the credit and liquidity crisis of 1966, to the oil embargo disaster of ’73, to 1980 when banks scarcely escaped a collapse and interest rates rose to 22%.

If you do the (very simple) math, it’s clear that we’re overdue for another economic crash – and a big one.

2 – Gold and Silver Are Losing Value

One thing has always been certain – when the U.S dollar’s value goes down, gold and silvers’ values drive up. However, the price of gold and silver (the safe haven for many preppers) is steadily decreasing – and history has shown that when the value of those precious commodities go down, we are standing on the precipice of a major financial and economic downfall.

3 – Printing Money At Its Breaking Point

Our reckless Federal Reserve has been printing massive amounts of money more often than ever before (hello, inflation) and our national debt is at an all-time high (over 18 trillion dollars!).

Just think about how much you spent the last time you bought something like gas, milk or even water and write those prices down – now wave goodbye to them, because the costs of those fundamental goods are going to continue skyrocketing to incredibly highs (leaving us hardworking Americans to do without and to fend for ourselves).

That’s not all – not even the tip of the iceberg. Here’s Harry Dent with even more signs that we’re in the “end times” of economic stability:

Ok, so this is all very real and scary stuff – so what can we do to prepare for when SH(and it will hit)TF?

Well, despite what you might have been led to believe, your most precious commodity during the ultimate upcoming economic collapse will not be silver and gold – they can not and will not save you. Nor is it your savings account.

The real answer is simpler than you think: FOOD.

…Yes, simple food is a great investment opportunity. Not only will you need it during the collapse, but it has one of the highest inflation rates today. The average inflation for food is currently eight percent. That means that if you buy $1,000 worth of food today, in five years, it will be worth 47% more than that. That’s a pretty good investment.

Let’s think about this rationally – when the economy finally collapses, food prices will therefore be at an all-time high and hordes of families will be competing with you at the grocery store for the last gallon of milk and loaf of bread.

Investing now in food (while it’s still relatively cheap by comparison) isn’t just an investment for your bank account, but a security in the safety and health of yourself and your family.

Plus, not only does stockpiling food now prepare you for eating better and more often during the imminent economic downward spiral, but this food will prove to be an incredibly useful bartering tool.

When all the other families on your block are biting their nails about what they can eat to survive, you’ll be in the sweet spot of trading them their precious food for commodities that will exceed your survival, such as bullets and weapons.

Like we’ve said time and time again, it’s our job at Survival Frog to prepare our clients with the information and capacity to survive, and survive well during a crisis. And my friends, we’re facing a doozy of a crisis.

When the world is crumbling down around you, you’re going to need constant sustenance and replenishment to keep your wits about you and your head on straight. You’ll be able to do all of these things and more with ease by purchasing our Wise Company 120 Serving Meat Buckets.

These suckers will get you through anything (and we mean anything) – each pouch is packed with protein and is filling enough for a hearty meal (they even come with instant long-term rice for more sustainability).

They’re also delicious tasting and ridiculously easy to make (simply add hot water and heat for a few minutes on a stove) and, most importantly, they’re built to last.

These beauties have a shelf life of over 15 years (longer than most canned/processed foods) , have handles for easy carrying and are packed in stackable containers that won’t take up unnecessary space in your home.

You don’t have to take our word alone on it either – these meat buckets have been featured on National Geographic, Outdoor Channel, The Military Channel, Fox News and more – all raving about their high quality, great taste and affordable pricing.

In fact, we’re so confident you’ll love these buckets that we’re knocking 9% off your total cost…but only for a limited amount of time.

Remember – in unstable times like these, the only certainty is your family’s dependence on food. Don’t starve, be prepared, save your family and survive.

Click here or on the image below to purchase your meat bucket today and save the 9% while you still can. 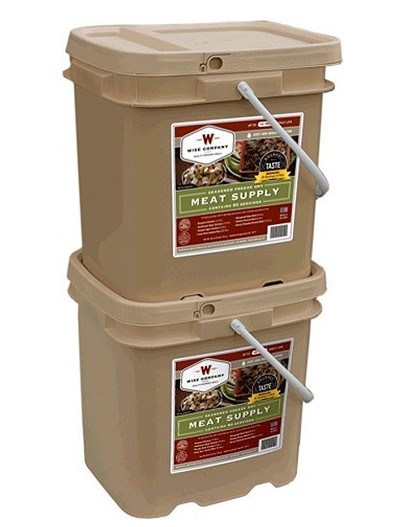