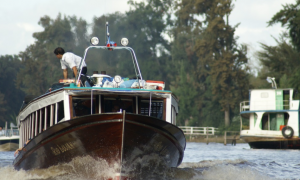 Who wants to bug out on a boat? Honestly, not many people even know it’s an option honestly When I talk to most preppers, almost all of them think alike when it comes to SHTF survival.

That’s not because they’re incapable of thinking for themselves. It’s just that almost all of them are land-lubbers whose instincts don’t account for going out on the water for survival.

That’s why I wanted to give a different perspective on survival.

Take a look at this article a friend wrote for us. It’ll open your eyes up to a totally different aspect of survival most people don’t consider.

Can You Bug Out On A Boat?

Preppers are known to find the most ingenious solutions to survive… but bugging out on a boat? Isn’t that a little extreme?

Not if you’re close to the shoreline and if you love boats. Bugging out to the sea has its own benefits as well as its own set of challenges. In what follows I want to tackle them so you can see just what you’re getting yourself into before you make this big step…

You’ll be all alone

You’ll be far, far away from most people, but keep in mind that airplanes, submarines and other boats may have radars and quickly spot you. Other than that, you won’t have to worry about looters and angry mobs stealing your supplies or unprepared friends and neighbors asking for food and water. This is by far the biggest benefit for situations where staying away from people and disease is the only choice.

You get to stockpile more tools and gear

More than you could ever fit inside your car’s trunk or an INCH bag, but less that you’d be able to store at a bug out location.

It depends on the size of the boat, of course, but bigger ones are also expensive. Still, but you should have enough room to get the essentials and make sure that every container is airtight. Some of the things you’ll need that are specific to this particular bug out scenario include:

…and these are just a tiny few. Every cubic inch of storage should be used, and keep in mind that the items you bring long will have to face storms, so they need to be kept in waterproof containers.

You’ll have lots of renewable energy at your disposal…

Provided you have a wind turbine to transform it into electrical current of course. Not all days are windy, though, so get a solar panel as a back-up.

You can travel large distances

If the situation takes a turn for the worse, you can go pretty much anywhere in the world. You probably won’t, though, unless you have a large sail boat. Still, so long as you stay near the shore line, you’ll be able to navigate as far away from your home as you have to.

What could cause you to do this? A Yellowstone eruption, for instance. They say that, if the caldera erupts, 2 thirds of the US will be covered in ash.

Are there downsides to bugging out to sea? You bet, so let’s tackle them one by one.

If it happens while you’re ashore, you can kiss your boat good-bye. In this situation, the only way is to go inland as fast as you can. But what if you’re already bugged out when you receive a tsunami alert? I’m no expert but if you’re far away from the coast line, you might not even feel it.

Tsunamis are about a foot in height, but when they reach the shore that they start to slow down and waves can be 100 feet high. Further research is needed on your part but if you’re near the beach, your best bet would probably be to abandon your boat and head for high land ASAP.

Warships, pirate boats… some people think they are likely to encounter them in a post-apocalyptic scenario, while others don’t worry about them.

At the end of the day, it all depends on what you’re prepping for. If you’re getting ready for a Russian air strike, then you’re much better off hiding somewhere in the mountains than showing up as a green dot on their radars in the middle of the ocean.

I’m no law expert but, as far as I know, you can carry firearms in international waters. It’s when you reach the shoreline of another country that things become problematic. Still, you’d need means to protect yourself, so give the “guns on boats” issue some serious thought.

Another thing you can do is to opt for some alternative weapons that are not firearms. This way, if they confiscate your guns for whatever reason, you’ll still have means to defend yourself. Many of the self-defense weapons that are not lethal are only good in close combat, which may very well happen if someone form another boat decides to sneak up on you one night.

You should definitely give the issue of personal security some thought, as staying on guard 24/7 is going to be tough when you’re out there. Same thing if you’re bugging out to the woods: you never know who spots you and wants to harm you with or without a reason in mind.

Even if there won’t be any tsunamis, you still have to worry about storms. A sailboat won’t be enough to make a run for it when one approaches, so you’ll probably want an engine on your boat plus extra fuel.

Since you won’t be able to barter for things such as batteries and flashlights, it’s mandatory that you have lanterns, emergency radios, flashlights, a satellite phone etc. You should protect your gear from EMP and CME by placing everything in an ammo box, and insulate it with a few layers of aluminum foil mixed with layers of cardboard. Make sure the layers as well as the ammo box are completely sealed – you’ll end up with the perfect Faraday cage to prevent your electronics from getting fried.

Spending months on end on a boat without setting foot on soil won’t be easy if you’re not used to it. Even if you are, your spouse and kids might not be. Plus, you have to know your boat inside out and be able to fix any problem with the tools you have on board.

Bugging out on a boat can be tricky but if you have the boat and you have the experience, the sea just might be the best bug out location for you.

Of course, plan A should always be to bug in, unless you happen to be on a boat. Staying inside your own home is the least risky alternative unless there’s a very good reason for you to abandon it.